During the day yesterday I drove around the area, trying to avoid getting my car stuck in the rather large mud patches which had materialised in the dirt roads following the overnight rain.  I was pleasantly surprised by some fairly classical karoo images (considering of course we are the end of the rainy season, so the place is much greener than is often the case): 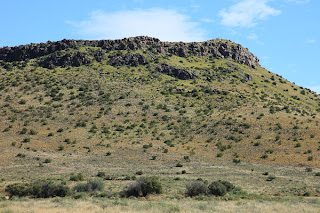 But this morning was very special. What a magnificent lightshow!  After all the initial days with no clouds, and boring skies, the last two days have have much more rewarding skies. This morning we went out with a general direction in mind, but no specific image (which I generally try to avoid, but I really hadn't found the killer locatioon the day before). Eventually we stopped on the side of the road well before sunrise, with two koppies and some clouds above them determined to be the morning's target.

By the time the sun was just breaching the horizon, those clouds had dissipated and that image with them.  But instead we were blessed by a completely unpredicted show of colours and cloud shapes and textures in a different direction. Some of those results are below, followed by a couple of the area once the sun was fully up and casting warm colours on the veld and hills. Then it was unfortunately time to head home. It's been a wonderful time, experiencing very different parts of the karoo, all beautiful in their own way. And in an unusually wet season, so the veld is looking better than it has for many years.  Of course that can't be said to be entirely 'typical' of the karoo, so I'll have to go back when it's dried out somewhat, to capture some of that extreme dryness.

I think next time I may just focus on one region / biome of the karoo at a time, to understand, and capture, each region more authentically.

In the process I have met a set of very friendly, very welcoming hosts, stayed in unusual accommodation, been fed fantastic South African, and more specifically karoo lamb, dinners, learned a lot about the area and some of its history.  Hopefully in the process I have captured some images which express the typical, and beautiful, karoo landscape.

Now the shock of driving home - off the dirt roads onto the mad national long distance roads, and what a horrible brown smog over Joburg when approaching from the south-west.

As soon as I have filtered through all my pics, I will post a bigger set on the website (and larger pics), and update the blog to reflect that.

Thanks for sharing the journey with me, and I'll be back in the outdoors just as soon as I possibly can!