Friday morning was an early start again, heading out across the koppie half an hour before sunrise.  Thick grass, dark rocks, thorn bushes, and no paths don't make it easy to clamber over koppies in the pre-dawn light. Its a chilly morning again, I brought the fleece and jacket, but didn't think I would need the gloves. Standing around waiting for the sun to rise, especially when the wind blows, isn't the warmest of occupations. Looking around, I see a hint of clouds, but sadly behind me, not where the camera is pointing! Not useful for this morning, but at least it gives gives me hope that more will come. I think I heard something on the weather report before I left that a cold front would be coming up from Cape Town. That's not good for the cold, but might bring some interesting clouds. A couple of pics from that session: Then its back to the farm, an excellent farmstyle breakfast, and pay up, and I'll be on my way.  They have a pretty sophisticated set-up at this farm - I'm able to pay with Credit card! It will be very different in the ones to come.

Heading off at 9 am (minus one pair of fancy sunglasses, which got nicked at Magersfontein) I get on the R357, through Douglas, to Prieska. It's a bit potholed at first, then becomes a very nice road, and I make good time to Prieska. The biggish trees of the highveld grasslands were gradually making way for smaller bushes, and the grassland becoming sparser and more scrubby. At Prieska I thought I might stop for drink and lunch at a coffee shop, but turns out Prieska is one of those towns where loads of people are just hanging around town doing nothing, quite a few walking along with their beer bottles. I'm sure there's a pleasant enough coffee shop somewhere, but leaving my car on the street with expensive camera gear inside wasn't appealing, so I left again and stopped at a lay-bye outside town for a stretch.

Keeping south again, in the direction of Carnarvon, I soon hit the dirt road, which was to last most of the remaining 200km. It was actually a pretty good road, of course barely any traffic, and easy to stop along the way to check out any candidate photo opportunity.   At last a few hills appeared south of Prieska, and it also wasn't long before I noticed the clouds building up - hurray! I had to stop and take a picture of an otherwise un-spectacular scene. 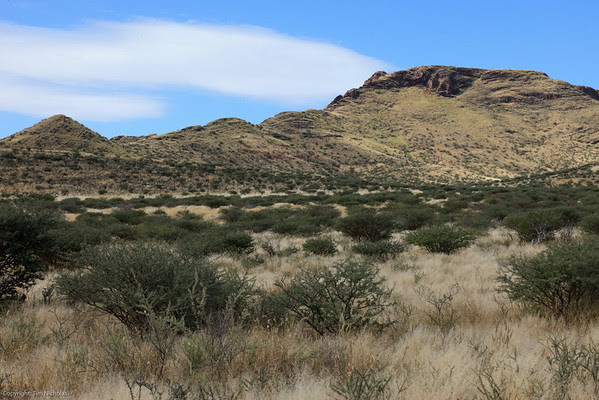 But it then became flat, long and pretty dull. 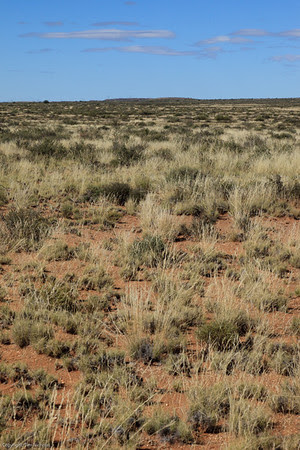 You may ask ""what am I supposed to see in this picture?'". Well, nothing really, that's the whole point, the Karoo is full of lots and lots of scrubby nothingness. In case you don't believe me, try driving on these roads - many kilometers of straight roads, an occasional turn, and then out it stretches again into the barren landscape.

I'm not surprised that when this chap found water in this nothingness, he got a bit over-excited when naming his windmill!


Fortunately, there are some interesting sites to break the monotony. This one is a salt pan of some sort, it is actually being mined just out of the picture on the left.

Finally arrived in Carnarvon, which looks like quite a bit of effort has beem made by quite a few residents to restore and look after their old karoo homes. I didn't have time to stop and expore, but will have to come back tomorrow. Back on the tar road south towards Loxton, the turn-off to my next destination - Osfontein Corbelled Guest house- came up quickly.

It's run by a lovely couple - Natascha and Stegmann Lubbe- who invited me into the farmhouse for coffee, and to catch a re-run of Kate and William's wedding! But the accomodation is what brought me here - they have very successfully restored an old corbelled house on their farm. These are houses that were built in parts of the karoo by trekboers  in the early 1800s. With very little building material available in the desolate karoo, they built these houses from smallish pieces of flat stone. Round or square walls, then an igloo shaped roof, made with overlapping stones, using a clay as a mortar. There are still several standing on various farms, mostly further south west, and a bit too far for this trip. But a very authentic stay-over, and fantastic people. Stegmann even herded his sheep especially for me to take photos (where do you want me to move them to? And his sheepdogs moved the heard into the right place!). He told me this season they've had the most rain since 1974, so his dam is full, the grass is still quite long, and he seems happy with the result. 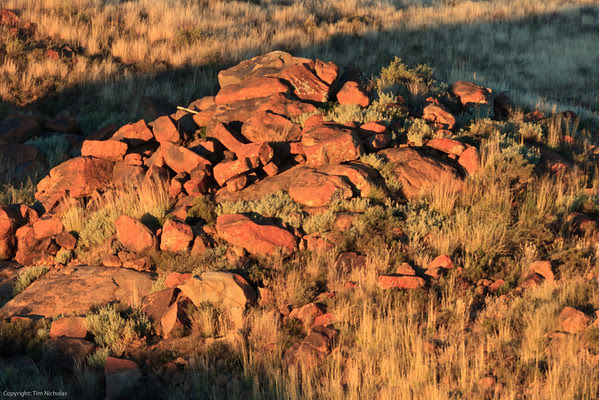 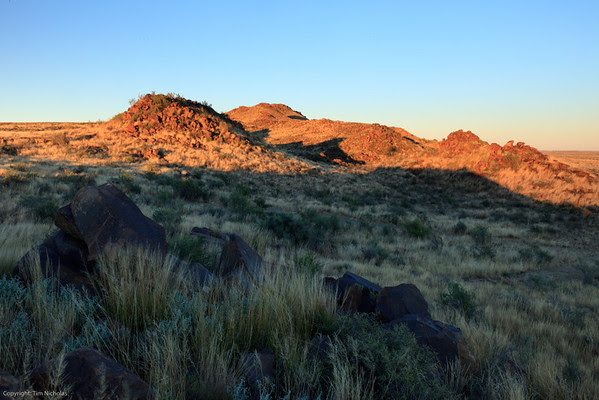 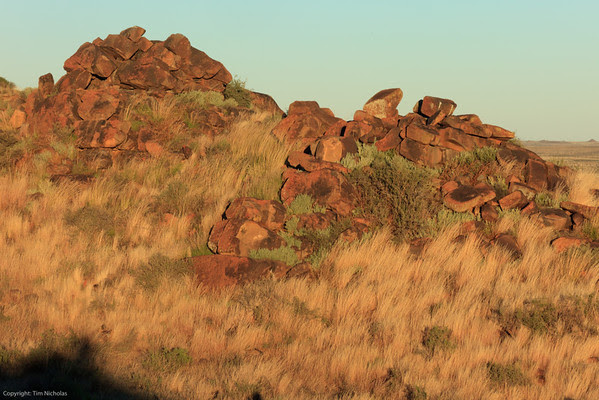 Now it's off the the next farm. I had to take a diversion through Beaufort West to get to a chemist in a hurry (a tooth infection starting) and to get cell phone coverage. I don't know yet whether I will have coverage at the next place, let's see!
Tim
Posted by Tim Nicholas at 1:46 PM No comments:

First stop Langberg Guest Farm, 22km south of Kimberley. The first thing I noticed driving south yesterday was the  gradual dissipation of clouds - not good news for landscape photos in general, but particularly a problem in the  wide open spaces of the Karoo, where you need something to give interest in the sky.  It hasn't been possible to  come through earlier, hopefully its not too late.

I clearly haven't got into the Karoo proper yet, its more the edge of the Highveld grassland. They have apparently  had very good summer rains, so there's still a lot more grass around than I was expecting. Good for the animals, but  very difficult to take photos in the long grass! 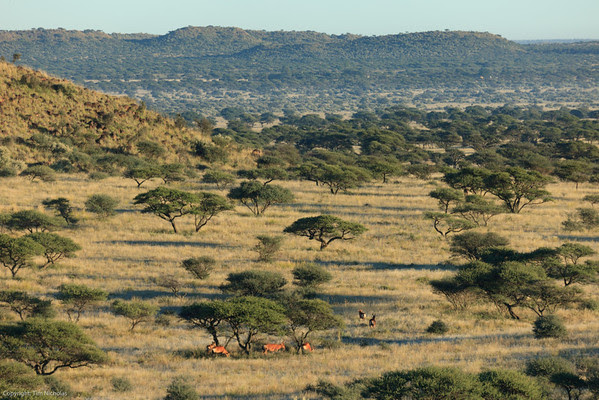 The farm does some olives, but is mostly game farming now. When I asked why the gate to the hiking trail was  padlocked, I was told 'well, we now keep buffalo in there, and we are worried they might kill someone'! Ok, so I  will go in the other direction.... 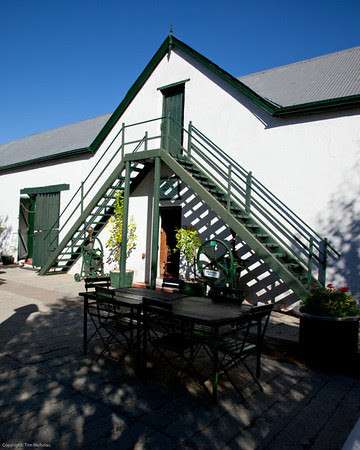 The accomodation is based on the old stables from 1860, that have been done up very well, each main stable forming a room. Very nicely done, good dinners served (if you order dinner in the  morning!) - what a pleasure compared to my usual of coming back to the campsite after dark and only then starting to light the fire, cook food, etc. 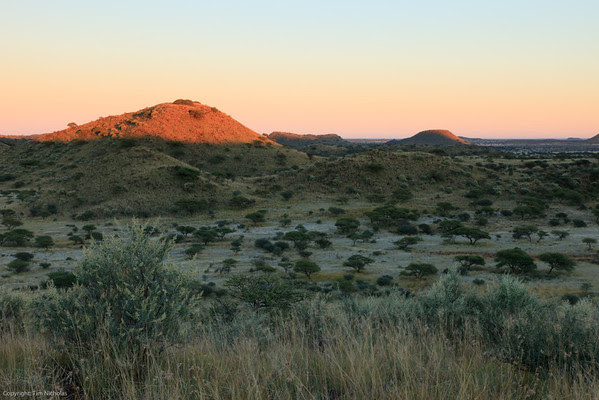 This morning's photography wasn't a big success, its always difficult first time out in a place. And with the very long grass, and thick bush,  its pretty difficult to find a clear view of anything, plus once the pinks/blues have gone, that empty sky is really boring!' We'll try again tomorrow morning...


Also spent some time a few kilometers away at Magerfontein, the site of one the the Anglo-Boer war battles. I'm glad  it wasn't me who was trying to cross this open grassland to attack the koppie, while being shelled by Boer guns from  the hill. 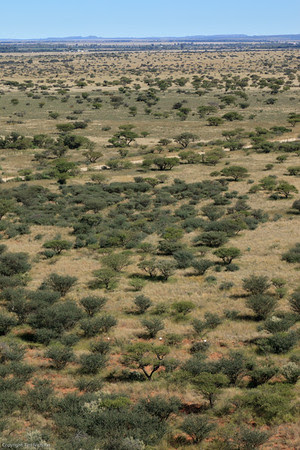 The tiny white markers near the bottom of the photo is the trench line where the Boers were dug in. The Scottish Highlanders lost this particular battle.

Tomorrow, after an early morning photo attempt, then breakfast, it will quite a long drive to Osfontein farm, between Carnarvon and Loxton, via Prieska. I've never been anywhere near these places, and barely heard of them, so it should be interesting..
Posted by Tim Nicholas at 9:50 PM No comments:

Car's packed (it's a WHOLE lot easier without all the camping gear!), camera batteries charged, hiking boots loaded, and I'm ready to go.

Map of the Karoo photo trip

What would we do without Google Maps, Google Earth, Garmin, and other cools tools?!

The farms and (initially) planned routes are shown on the google map below (click on the link below it for a bigger view):

Booked my last farmhouse stay - two nights at the Kraankuil Guesthouse, about 30km south of Hopetown.  Pieter (the farmer) tells me that they have had good rains recently, and the place is looking beautiful.  Apparently his wife has just bought a camera, so she will be enthusiastic to show me around the farm as well as learn something about photography.

The farm is also next to a main rail line, so perhaps there will be a chance to capture one of those great Karoo freight trains.

That's why I stay in farmhouses - its a great chance to meet really great people who really know their areas, and are always willing to help an ignorant traveler!
Posted by Tim Nicholas at 8:47 PM No comments:

Planning a photo trip to the Karoo

Ever since driving through the Little Karoo on the way back from Cape Town at the end of 2009, and realising how difficult it is to capture meaningful images of the magnificent wide open spaces - numerous beautiful views could only muster very bland, almost empty images - it has become a bit of a mission and go back and improve my photographs of the Karoo.  Since I've had the working title of my next photo book (Through Arid Lands) in my mind for quite some time, but still being very short of images to use, there is a second imperative.

An opportunity has finally presented itself to spend a few days exploring the Karoo, so I am now planning to leave next week Wednesday (27th April).  It is of course overlapping with numerous public holidays, so some of my preferred destinations are not available this time, but that just means I will have to go back!

The first 5 nights have been planned and booked so far, in all cases trying to stay on working farms or country lodges which are each closely connected somehow to the local history or way of life.  This time I will not be camping - too many changes of location in a short space of time, plus there are not too many suitably located campsites.

First stop will be two nights at the rather decent looking Langberg Guest farm, south of Kimberley, then a long drive through Prieska and Carnarvon to stay in one of the original Voortrekkers' corbelled houses on the farm Osfontein, just before Loxton.  Unfortunately it is only available for one night.  Then it is turning back north, and two nights at the Taaiboschfontein Farm, south-west of Three Sisters.

The remaining two nights are still to be booked, but I'm hoping to make a routing through some of the famous old railway junction or diamond towns like De Aar, Belmont, Jagersfontein, and others.  Those are to be booked tomorrow.

As soon as all is planned, I'll be putting up a Google Maps routing map showing all the routes and stopping points.  Some of these places I've never heard of before either, so its going to be fun to learn and explore more of this beautiful country!

I hope you'll join me.
Tim
Posted by Tim Nicholas at 10:15 PM No comments: